The Billboard Prank, squirrel farts, getting locked out of Twitter, Philly sells out in three hours–SO WE GET A BIGGER VENUE, manspreading at the gym, Larry’s secret petting zoo, cat yoga, party ghosts, time wasters and the time police, hockey, real talk with customer service, the mid-life crisis of fifth graders, Power Ranger parking crimes, Larry’s Viagra Voice contest, a Dr. Phil Bounty update, animal news, Asterios’ The Biggest Makes Me a Rage in History, PETA and the zero sum wild animal economy, and a three-way bragger; all that and more this week on The Dick Show!

Last week, ROAD RAGE: PHILLY sold out in a couple hours at 3AM. Unless you were awake finishing a night of heavy drinking or up early starting a day of it, you were assed out. My bad!

The Dick Show Presents Road Rage is a thank you party. It’s an event for all the Morlocks to de-grease, find their most offensive shirt, and unleash the monster for an evening of raging and raving and illing and pillaging. There will be no lying and implying at these events whatsoever and I’ll be fucked if anyone can’t get in because the building is too small. That’s not the America I was born into and therefore radically identify with. With the help of DJ BeeTee Beats, we found a new place, the biggest goddamn venue Philly’s got: The Trocadero. I’ll give you guys the inside scoop. It cost $2,000 to rent this motherfucker, but it’s worth it to me so long as every last DickHead who wants to come can get in. Scarcity can suck my cock. What are we, animals in a nightmarish hell like PETA wants us to be?

I got locked out of Twitter last week for committing an act of arson against a 40-year-old man. He was burned beyond all recognition. In fact, doctors say he is in critical condition mostly in the ass region. Here is a pic of the offending burn (since deleted) and the Reddit thread surrounding it. 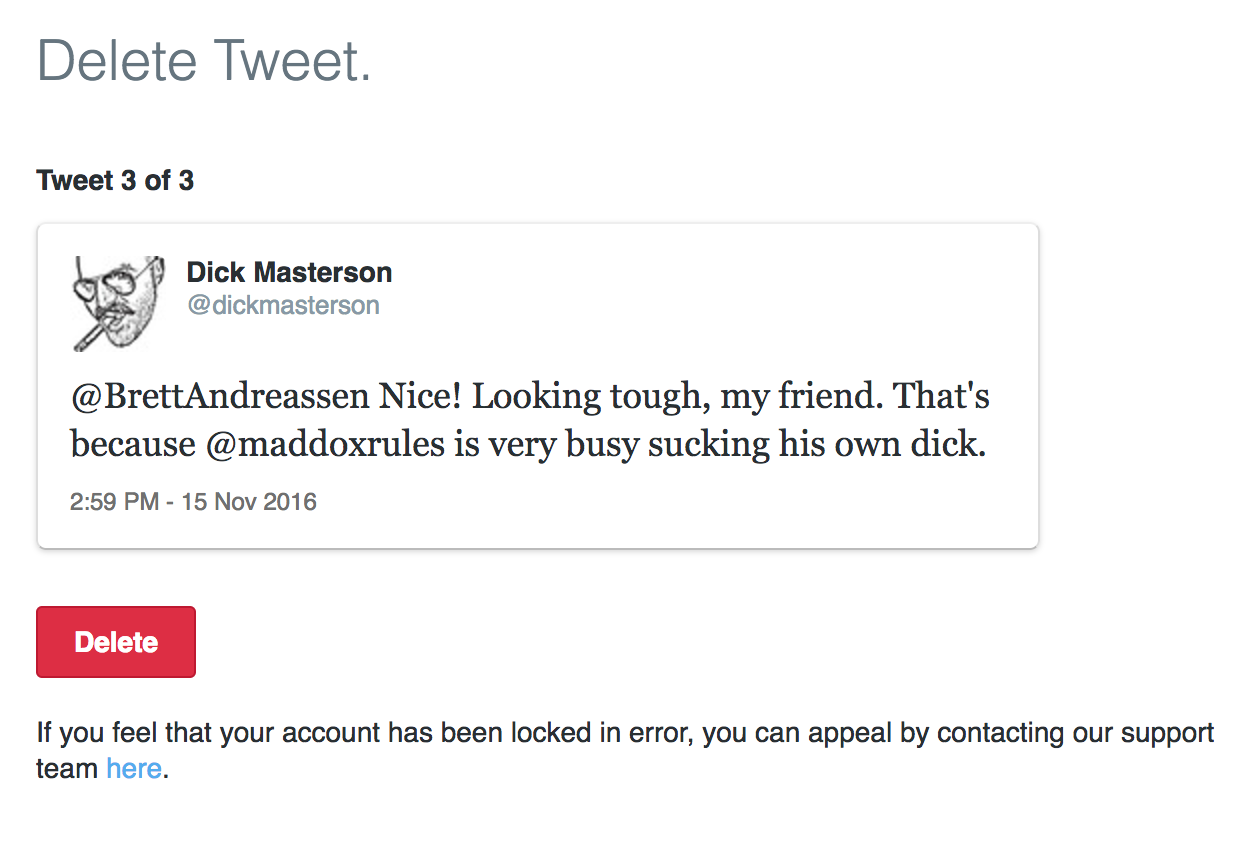 I’ve been banned from enough places to have a pretty good sense of when I deserved it, and I don’t think I did this time. But that doesn’t matter because of a refrain that if I have to hear one more time, I’m going to blow my goddamn brains out, but first I’m going to punch whoever said it so hard that their human flesh suit flies off and reveals them for who they really are: that new Muppet on Sesame Street.

“Twitter can do whatever they want a’cuz they’re a private business.”

The day McDonald’s can pay their fry cooks $1 a day, and used car dealers can offer a free complimentary gigantic shot of heroine with every test drive, and cock fighting replaces Monday Night Football, and I’m allowed to carry a TEC-9 into a movie theater because I want to feel cool while watching action movies, and health care companies can deny pre-existing conditions–which include being more than 10 pounds overweight and also the rates are based on your race, and prostitution is legal, and smoking in Costco is legal, and every bar having a piss jug tied to a rope in the corner instead of a bathroom is legal, and a 17-year-old can buy a Playboy; that’s the day when a private business can do whatever it wants, you Muppet. Until then, blow it so hard out your ass that it rips a new hole in your ass and then blow it out that one.

I’m sick of getting Helen Keller’ed online and having my ability to communicate with anyone fucked with by a bunch of virtue-signaling, Silicon Valley, hive-mind, parasites trying to salvage their shit companies’ scam IPOs. Why the fuck else would Twitter’s stock price look identical to Snapchat’s and every other social media NYSE-funded Kickstarter that’s ever going to come out? Because it’s a big goddamn scam. It makes me a rage, you might say, and in the aftermath, I ask what exactly the point is of having a net neutrality if everything that gets sent across it has to conform with the gentrified language and progressified delusions of the Modern American Pussy?

Before I step into my lumbersexual, manly-man cosplay outfit, let me clarify. Everyone is turning into a pussy and I’m okay with that. In fact, I support it. I’m not leading the charge, but I’m giving a big thumbs up–at least I would be if I wasn’t so lazy. I value my knees more than I value my dick, which an analysis of the data would prove based on the levels of usage and abusage I subject to both. The dick gets more. I support the gradual evolution of the human male from a grunting ape into an effete, noodle-armed race of alien men who don’t even wear pants because their dicks are so small they’re practically libertarian. Convenience begins where my imagination ends and I’ve got a big imagination. I’m fine with everyone becoming a pussy, but some people are trying to accelerate it before it’s time, and that makes me a rage.

In other news, several weeks ago, I issued a $1,000 bounty for the return of my lost Dr. Phil House of Judgement episodes. I figured this would be an easy score for some lucky data hoarder, however, even Top Autists were unable to recover the episodes. They seem to have been deleted from syndication, the archives, even the Dr. Phil website. It’s as though they’ve been erased from history. This week, I bring in a reason for this mess. Apparently, Dr. Phil was hit with a lawsuit regarding the naked man who showed up for dinner. Read more about the Dr. Phil lawsuit here. It looks like I might have to increase the bounty. What I really don’t understand is, why wasn’t I asked to testify in this case?

Asterios sends in a familiar bit that is not called The Biggest Problems in History, Larry talks about his secret petting zoo, Layc has some animal news, Someone wins the Rage Lottery, and Sean gives us a Sean-sible chuckle courtsey of Ashanmaril.

Here’s the original. If you watch them for long enough, they sync up. I watched them for several hours.

And a merciless thumbnail by Clay Burton!