Madcucks and the Nuclear Goss Bomb, The Age of Logic, Operation Charlie Brown, my own Council of Doom, a rage with instant Sean-gagement, the misandrist conspiracy of fake gasps, the argument clock, two-party consent, dyslexic problems, the return of the Celebrity Shame Pool, deleted Tweets, and the one-two punch; all that and more on this month’s bonus episode of The Dick Show!

As we move toward representative gender parity in all media, I propose a she-boot of a classic children’s tale. I’m not being sarcastic like I was with my Saving Private Ryan she-boot, or my Glengarry Glen Ross she-boot, “Put the smart phone done. Slash aww is for closers!” I mean it this time and it will save more lives than baby Aspirin, BASE jumping laws, and Tammy’s Laugh therapy combined. Here goes. We’ll change “The Boy Who Cried Wolf” to “The Girl Who Gasped At Fucking Everything And Then Her Boyfriend Swerved Into Oncoming Traffic”. I have needed to be warned about a wolf exactly zero times in my life, but I have almost swerved into oncoming traffic on purpose because a woman was gasping at absolutely nothing at least once a week.

I’m pretty sure those fake gasps, and the five second mini-heart attack and then the prolonged, ten-hour rage-stroke that follows, is why women outlive men by 7 years. It’s a F.A.N.G. conspiracy; a nearly-silent but deadly cold war, and in this episode, I intend to put a stop to it, but first…

You wouldn’t delete a car.

You wouldn’t delete a handbag. Since deleted, but why? To hide proof of being triggered? Cram that little green monster back into its cage for a while after a gross and uncontrolled lashing out directed at someone who didn’t do anything? And now, a year later, when so much is out in the open, how much more triggered can crazy get? If you want to know what bad things someone claiming to be Jessica Redacted did last week in what appears to me to be a long-simmering continuation of this Tweet, download the episode. It’s worth it just to hear about Operation Charlie Brown.

I remember seeing this Tweet and it made me a rage. Not because of the content. I’ve walked a lot of beautiful women through Hollywood, so I’m used to skanks chirping at them. It made me a rage because it was anger directed at me taken out on someone else and there’s nothing I can do about it and it will never stop. Some people can pretend to be not enormous pieces of shit–even though they are. They skip along the surface of the shit puddle like a shit rock, dipping into it and getting a little bit of shit on themselves every now and then and acting like it’s rare, but eventually, they’re falling in–into the shit water, Randy.

In this episode, I go over a few of the threats I’ve received while conducting the Goss Train, each more transparent than the last. I have a unique way of dealing with threats though. I just assume when anyone gives me an ultimatum, either they’re going to do it anyway for lulz, or they’re never going to stop asking for more shit, so fuck em. Asterios was ratted out by Jessica Blum already. My friend was threatened by her with “involvement” for procuring this gem: 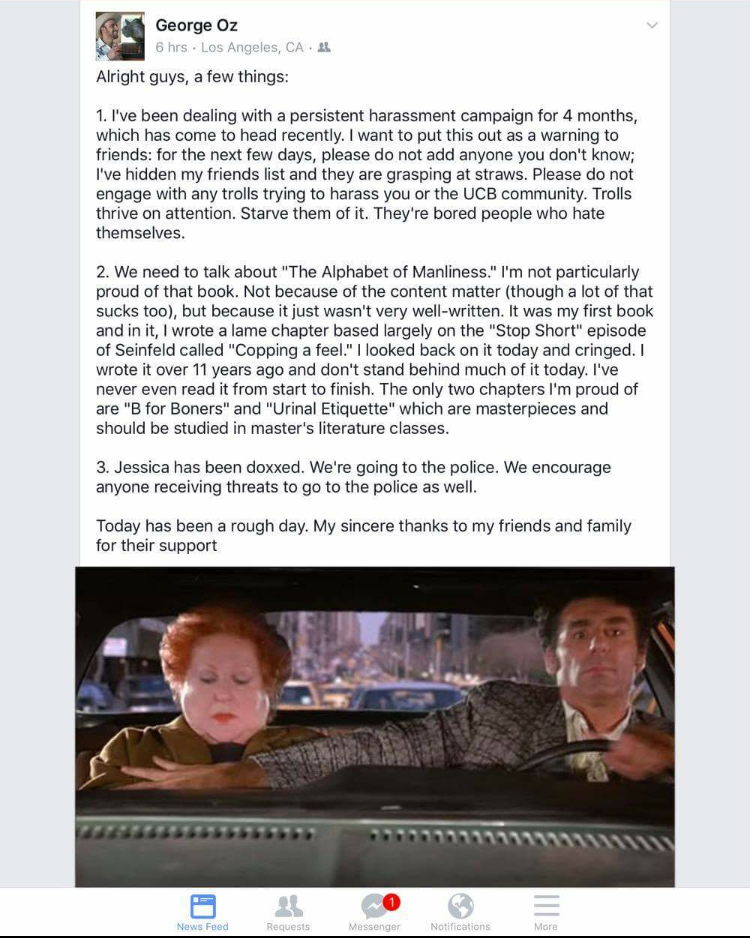 As subtle as a tank.

Neither Jessica or Maddox are ever going to stop making shit up and threatening people’s jobs and threatening to call the police. It’s an obsession and a match made in heaven. The later I understand. The Sunk Cost Fallacy is a hard pee hole to plug especially when you’ve been raised by at least one gambling addict, but the former, I don’t know. I’m guessing either Jessica has been a nobody all her life and is embiggened by the prospect of behaving poorly behind her small dicked, e-famous boyfriend’s Hollywood firewall, or maybe someone or something shielded her from consequences at a time when life beats the Mean Girls phase out of the rest of us. She does throw around “threats by cop” an awful lot. I wonder why that is? Go vote up Armchair Psychologists.

I assume the police have been already called about my stash of contraband screenshots–and of course the cocaine Maddox claimed I have in abundance in the previous bonus episode. I certainly hope so. I grew up in Los Angeles and the epidemic of cocaine-hoarding and back alley embarrassing screenshot sharing in this city has really turned it into a shit hole. I submit these screenshots for immediate destruction.

And that would have been all, but the Goss Train never stops. Between the time this episode was recorded and the time I posted it just now, Maddox threatened the musician who created the theme song for this show. Why? You’ll have to find out next Tuesday!

In the meantime, if you want to get your hands on this wicked YEEEAH!! T-Shirt hit up The Dick Shop! A thumbnail to celebrate Peace On Earth through Purity of Essence by Clay Burton!